Starting in 2021 we’re going to feature a Studio 23 artist/student and the work that they’re doing. We’re starting with our artist friend Diane Arendt. 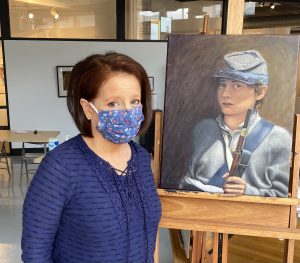 I sat down with Diane a few weeks ago to talk art, her art background, and life in general. Diane has been taking art classes at Studio 23 since 2015. Her main concentration being acrylic painting. You’ve probably seen her beautiful art work up on the walls of Studio 23, as she has been in many exhibits over the years.

Diane actually started creating at a young age. She studied art in college and worked a side job like so many students do. Diane’s side job was at a dentist office and one day while assisting the dentist she met a patient named Larry. Little did she know, she had just met her husband. Diane and Larry were married and started a family. Like so many of us, her art was put on the back burner. Diane spent many beautiful years raising her son, volunteering, and overcoming health issues. But, as her son grew older Diane knew she was ready to dive in to her art again. She started taking classes at Studio 23 as refresher courses but, has really stayed for the comradery with like-minded artists. Diane told me she is constantly learning from painting with others because she gets new perspectives all the time- ideas she never would have considered, otherwise.

Interviewing Diane and hearing her fascinating story of life and art, I learned that her major concentration in college was actually multimedia art. She also talked of her love for Norman Rockwell. How she admires his realism. She very much appreciates his ability to “say something” with his art. When we were done talking I really just had one question for her… “What would you say to someone who’s considering taking an art class at studio 23?” Her response was quick and sure, “Do it. Do it!! You’ll be in a great environment, you’ll learn more than you ever knew you could and you’ll make friends along the way.”

If you’re like Diane and you’re ready to dive into art, you can give us a call at Studio 23/The Arts Center or sign up online. www.studio23baycity.org. Winter classes start the first week of February so sign up today!

Studio 23’s mission is to provide the Great Lakes Bay Region with a vibrant arts center dedicated to making the visual arts relevant and accessible to all. It is our passion to connect artists with our local community and to engage our community with art! 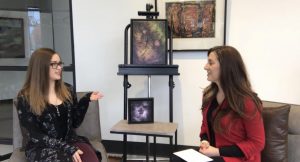 This past week we sat down with Amy Gibas, a member of Studio 23 to talk about her journey with art and how Studio 23 helped connect her with artists right outside her studio doors.

Amy Gibas has been involved with Studio 23 since 2012, if our memory serves us correct! Amy taught Sip N’ Swirls at Studio 23, during her BFA program at Saginaw Valley State University. Then she moved on to complete her MFA at Ohio University. Luckily, we had Amy move back to our community to begin her career in the Great Lakes Bar Region. Right away she wanted to reconnect with the art community, to work alongside artists just like she did in school.

On FaceBook she saw a post for the 100 day project with Studio 23. This opportunity helped connect her with local artists and our Curator, Valerie Allen. Val and Amy shared a vision to create a group for artists that would help engage with one another, participate in professional development and notify each other of exhibition opportunities. Amy tells us that Studio 23’s Artist Collective was formed by the excitement around the first 100 day project.

You can be a part of the Artist Collective by becoming a member of Studio 23. Through the collective they host various events throughout the year, focusing on networking and professional development. They also have a private FaceBook page where they share information weekly on exhibit opportunities across the state and encouragement on artwork. 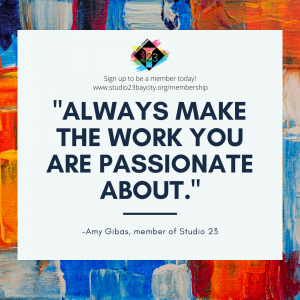 Amy’s best advice to up and coming artists is “Don’t give up and don’t sell out. Always make the work you are passionate about!”

Join Amy and the many other artists in our collective by becoming a member today!